This is an overdue post from Dell EMC World (Oct 17-20) – my final one actually. Full disclosure that DellEMC paid for my flight/hotel/conference pass. Also, full disclosure that I’ve since then accepted a position with a company that competes with EMC in certain areas (blog post on that to come later this week). You be the judge if any of my commentary is influenced by any of that.

Looking back at DellEMC World is somewhat bittersweet – I’ve been in the partner landscape for 8 years after 7 years on the customer side and the amount of turbulence right now exceeds anything I’ve seen before. I’ve not going to try to summarize the entire conference but rather post a couple of my own thoughts (you can get far better comprehensive analysis from other places).

Congrats to DellEMC for pulling it off – successful conference for what it was meant to be in this ever shifting landscape of technology driven craziness.

Note: links to my blog posts below (10 total…phew) as well as other EMC Elect blog posts  – if you’d like your blog post added, just let me know (apologies if I left you out).

From a conference perspective, I’d say this was a success – it felt “Dell-ish” but with EMC polish. The most jarring moment for me personally was during the first keynote (live blog here). The first parts with Michael Dell and David Goulden felt like what I’m used to however about 2/3 of the way through a cart was wheeled out on stage. My immediate reaction on Twitter was “demo time!”. But it wasn’t demo time….it was product showcase time — 43″ monitor that can take (4) video feeds, new laptop, etc. That was the moment where it felt “different”…and then I realized that all the previous Dell World attendees must have been feeling that sense of “different” for the first 60 minutes of the keynote. A later discussion in the week with a historical Dell partner confirmed that sense — he described how about how last year Microsoft was on stage with a huge overall desktop/laptop focus. 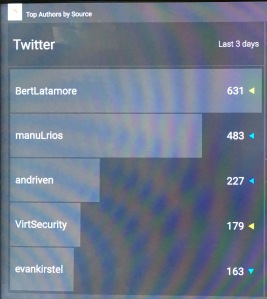 We came, we saw, we tweeted and blogged the living daylights out of it.

From a social media perspective, it was incredibly cool to be the #3 ranked Twitter contributor and see the HUGE impact of EMC Elect on the conference social media presence. We came, we saw, we tweeted and blogged the living daylights out of it.

I really appreciated the access provided to EMC Elect – the best of any conference I’ve attended. 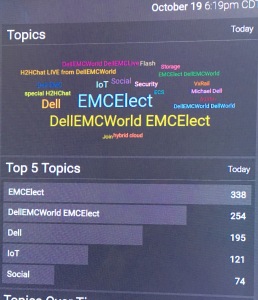 As a partner, you have to be far enough ahead of your customers to provide value & expertise but not so far ahead you’re not relevant to their needs.

From a partner perspective, it’s a crazy world. If you look carefully, you’ll notice all the partner success stories are around historical Dell partners. Historical EMC partners are very…well…nervous. I don’t want to violate any confidences but let’s just say that despite the “‘zero tolerance” for deal registration violations’ discussion from John Byrne a LOT of partners are seriously concerned about seeing their business models upset. Put another way, that could mean people out of jobs, adjusting their technology go to market options, or both. I’m NOT doom and gloom here but there’s a lot of uncertainty paired up with some other manufacturers (NetApp & HDS for example) making notable partner program improvements recently. It’s a shifting landscape…but that’s always been where partners live. As a partner, you have to be far enough ahead of your customers to provide value & expertise but not so far ahead you’re not relevant to their needs. Case in point – CTO or Office of the CTO at a partner looks very different than at a vendor/manufacturer.

If you liked the power of a broad portfolio and working with the biggest players, you’ll like the Dell EMC approach

From a customer perspective, I’m honestly not sure how much changes. If you liked the power of a broad portfolio and working with the biggest players, you’ll like the Dell EMC approach. IMHO they’re doing a very good job with the portfolio they have – they’re not letting the integration slow down their product release/product improvement schedule. See XtremIO NAS capabilities as an example. If you prefer best of breed, there’s multiple things in the DellEMC portfolio that are truly best of breed (some aren’t though) but there’s also the classic “product roadmap leapfrog” game we’ve seen with competitors and startups for years. Pairing up VxRail with Dell hardware (or more importantly the huge Dell supply chain) will drive lower costs in the HCI space for customers — good overall except that it may slow the pace of innovation. Development costs come from somewhere and DellEMC will absolutely leverage their massive supply chain (as they should) to take market share – this will take the oxygen out of the room for other HCI vendors.

From a personal perspective, this was bittersweet as I mentioned above. I’d not made a decision on a next job while attending but knew there was a possibility I’d be moving out of the partner ecosystem. I really enjoyed the time spent with other EMC Elect, various analysts, and folks that I count to be friends in this crazy industry (many of those included in the first 2 categories).

Congrats to DellEMC for pulling it off – successful conference for what it was meant to be in this ever shifting landscape of technology driven craziness.